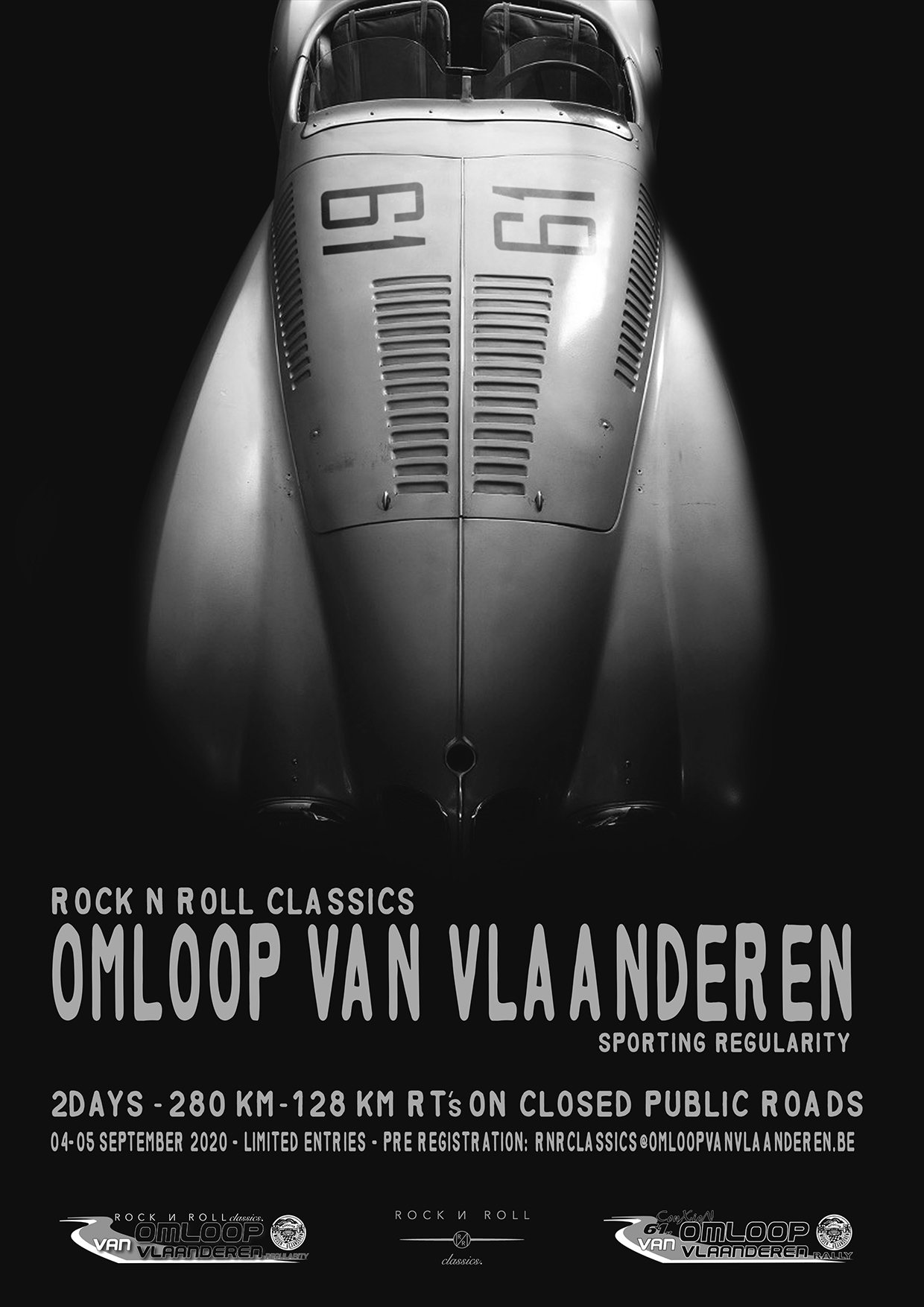 We are going back to the roots with the Rock N roll classics Omloop van Vlaanderen regularity, a true classiccar-rally that focusses on what really matters: sheer driving-thrills!

It all started in 1959 when the Automobile Club Mid Flanders (AMV) was founded by a tight group of enthousiastic autosport lovers. They wanted to bring the immensely popular rallysport to West-Flanders and see all kind of mighty racing cars roar around the tight and twisty roads around Roeselare. Fortunately, the city council of Roeselare was as enthousiastic as the AMV-teammembers and that same year the “Omloop van Vlaanderen” was born.

Back in the days, rallying consisted of “regularity”-trajects on which the rallycars used the public roads. These regularities were often driven by night to reduce the risk of meeting too much normal traffic and thus demanded the most of man and machine.

The Omloop Van Vlaanderen proved to be a great hit and has since then been organised for every single year, making it Belgium’s oldest rally counting for the national championship! From the fiftieth edition on, the organising club has been granted the privilege to bear the name “Royal”, so the Koninklijke Automobielclub midden Vlaanderen” was born! the The biggest (inter)national names in rally have taken their chance at competing on iconic stages such as Passendale (Passchendaele), Zilverberg (silver mountain), Beveren, de Ruiter, Rumbeke, Houthulst and, of course, zoning, the showstage. Many have tried, few have prevailed…

The excellent organisation and of course very demanding roads have made sure the “Conxion Omloop van Vlaanderen” has kept its status of one of the crown jewels of the Jobfixers Belgian Rally championship and has even evolved into being a leg of the “Tour European Rally Series, the European championship for R5-type of cars.

Now the time to take history back into the future has come. We are going to take you back into the haydays of rallying and will bring iconic sportscars from up until 1975 back on the legendary roads around Roeselare. This “Rock N Roll classics Omloop van Vlaanderen regularity” will be a true test for both man and machine, a challenge that will favour only the best teams of Pilot, copilot and car. Those teams who are looking to chase victory will need a mix of driving skills, roadbook/RT reading and a good handling car. We are putting all teams to the test on closed public roads, a unique feat nowadays, so nobody has to worry about upcoming traffic, side streets or blind corners. It is only you, the car and the clock to take into consideration. The entire rally will consist of about 280km, of wich no less than 128km special stages on closed public roads. The three stages on Friday will even be run in the dark… Power and handling are tested during a special power-stage, here you can test the pure performance of both man and machine.

The special stages will be exactly the same as the ones used by the National Rally championship and the European championship, properly closed, secured by Police and marshalls and lined with spectators from beginning ‘till end. The regularity-part of this rally wil be taken care of by the best in the RT-business: the Vanoverschelde-brothers. They will make sure every RT is a demanding one, with average speeds up to 65km/h and different timing-points per stage. There will of course be an age-related coëfficient-system for the cars, so even the oldest of cars will have a fair chance of winning. There are prizes for the best overall team, the best nightstage team and… one surprise-cup…

Do you feel your team and car are up to the task of competing in this all-in regularity test? Do you feel you have the best mix of man and machine? Do you feel the title “king of the RT’s” belongs to you? Then this is your kind of event! But: in order to keep quality high, we are only accepting a limited number of entries. In case there are more applications than available places, a jury will select the final participants out of the list of teams that have submitted and completed their application.

SO: mark 04 – 05/09/2020 in your agenda and keep an eye on this website and the “Rock N Roll classics Omloop van Vlaanderen” facebook page. Registration will be opened soon!

We are living in strange times nowadays. It seems like most of the world has come to a full stop in order to defeat the omnipresent Corona-virus. People are confined in their homes, businesses are temporarily closed and all events are cancelled. We of course fully support any measure that has been taken in order to secure the health of the population and meticulously follow the new rules ourselves.

We have been thinking about the timing to open registrations for our Rock N Roll classics Omloop van Vlaanderen regularity. Is it appropriate to do it right now? Is now the right time? We believe it is.

During difficult moments, such as the corona-crisis we are facing today, it is good to have someting to look forward to. Something so good that it will mark the end of the hard period or at least take your worries away for a while. We would like to help by creating something that makes you remember the good times of the past ánd look forward to the great things to come... Just remember: one day, this pandemic will end.

Of course our priority number one is the health of the competitors, their families and all civilians alike. We want our event to go through but only if we can organise it in a 100% safe, responsible and legal way AND without any compromise in quality.

In order to be able to organise everything to the highest possible level and with the large number of preregistrations in mind, we have decided to open registrations today. We are constantly monitoring the situation and will make the necessary adjustments to the program when needed.

Of course, if the situation would prevent the Rock N Roll Classics Omloop van Vlaanderen to be held, all registrations and payments will be handled in a correct and transparant way.

We are giving all we have to give you one hell of a regularity event So: fingers crossed and register your team today!